Hazelton takes the reins from as Parker retires

After 50 years in the business, local horse trainer and former Gilgandra racecourse curator Bruce Parker is retiring. The Gilgandra Jockey Club life member will be handing the reins to his grandson Kieran Hazelton. Mr Parker said that he’d been around horses all his life. 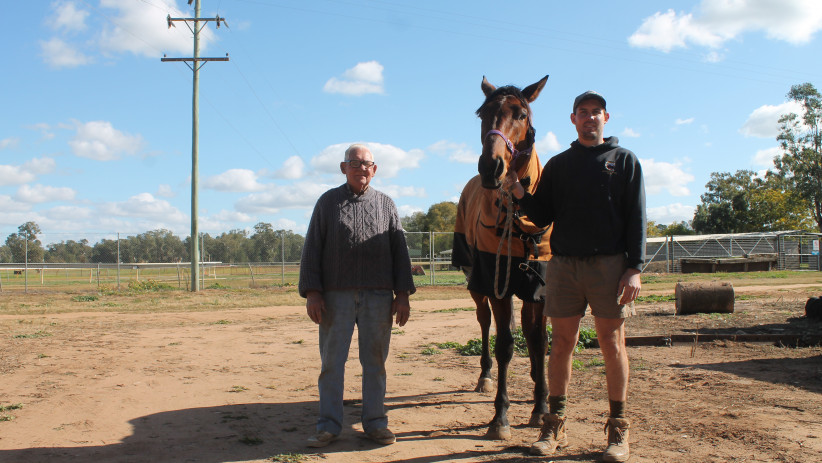 “I started with driving the horse and sulky to work when I was a kid, did the work carting wood,” said Mr Parker.

“I had trotters for a while and then I gave them away, I had a mate Gordon Thurston who’s a farrier come around one day and ask me if I wanted to get into racehorses.”

“He was the best horse I ever had, he won all the cups bar Gilgandra and Coonabarabran. He won Bathurst, Gulargambone, Coonamble.

“He held the record over 2000 metres at Bathurst for a few years. He used to jump out in the lead the whole way, he won about 18 races.”

Mr Parker’s last horse to race, Soldier Poy, will also be Mr Hazelton’s first. The former trainer was lamenting his recent form at the barrier draw after his grandson draw the inside barrier, number one, in his first ever race.

The newly minted trainer said he was excited to get started but had learnt not to get too worked up when it came to horse racing.

“It’s pretty exciting but I learnt pretty early not to get too emotionally attached because you’ll go home from the races upset more times than happy,” said Mr Hazelton.

“I was coming over here when I was 13 or 14 every morning and he’s been telling me for about five years to hurry up and get my licence, so I finally pulled my finger out. From about start to finish it probably took about three months to get it, with all the paper work, the test, the interview and all that sort of stuff.”

“We won’t see another Bruce Parker, there won’t be another bloke that put the work in he did, the dedication to racing as it is,” said Mr Diggs.

Gilgandra Jockey Club president Andrew Schier said that Mr Parker had always been seen as a mentor for younger jockeys in and around the club.

“He’s probably renowned as being a great mentor, especially amongst apprentice jockeys. He did have his own apprentice back in the late 80s, he probably had a few.”

Mr Schier said that the Mr Hazelton will do his grandfather proud and continue the families good name in horse training.

“I think that’s going to be a great thing, he’s got a good grounding. I think Bruce will be in the shadows there to make sure things transition smoothly but that’s been on for a while and I think Kieran’s going to make a good go of it.

“They seem to have a really good, stable following with plenty of owners that they’ve sort of introduce to racing that are pretty keen on it now. I think it’s onwards and upwards for anyone wanting to get involved with Kieran.”

Jockey club secretary Anne Hall said the effort that Mr Parker put into the track and training over the years went “above and beyond”.

“Any little thing that needed doing, he would always help and fix things. It’s a big thing to do that voluntarily,” said Mrs Hall.

“He used to train his horses in the morning and then go and do work for the jockey club through the day, I don’t even know if he took his lunchbreak.”