Dunedoo claims victory over the Panthers in the Christie and Hood Castlereagh League and Monarch Blues League Tag grand finals. 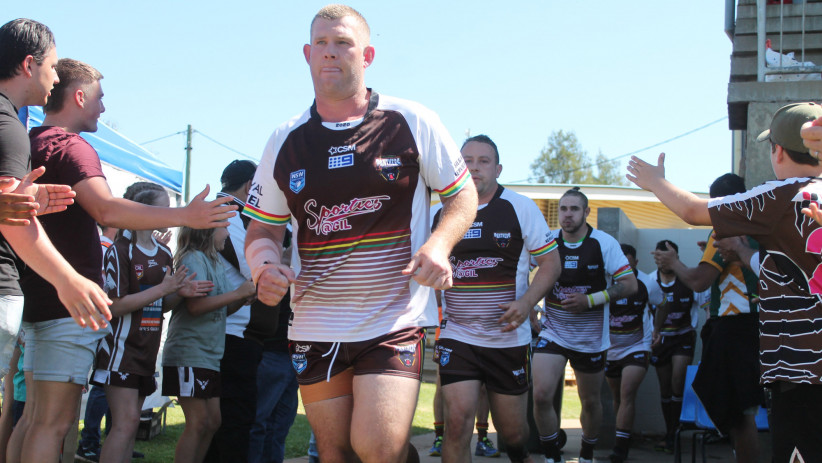 Buy Photo
Captain/ coach Ash Hazelton leads the Gilgandra Panthers out of the sheds before their unfortunate 16-10 loss to the Dunedoo Swans.

The Dunedoo Swans are the proud owners of the 2020 Christie and Hood Castlereagh League trophy after holding out a gallant Gilgandra Panthers side in the grand final played before a great COVID-Safe crowd at McGrane Oval on Saturday, October 10.

The Panthers ran on to McGrane with all their supporters behind them. The game was only two minutes old when Jordan Reynolds burst onto a pass from Luke Ritchie that saw him touchdown in canteen corner, only to be called back when the linesman called the final pass forward.

The Swans were able to re-group and a long-range kick deep into Panther territory had them on the attack. The Panthers were made to work hard to defend their line until Josh Nixon scooped up a loose ball on the try line. He raced 50 metres upfield only to be bundled into touch and the Swannies were back in possession.

Dunedoo then launched a huge bomb at the Panthers on the last tackle and, when the ball was fumbled, Swannies winger, Josh Toole, pounced to race away and score the opening try of the match. 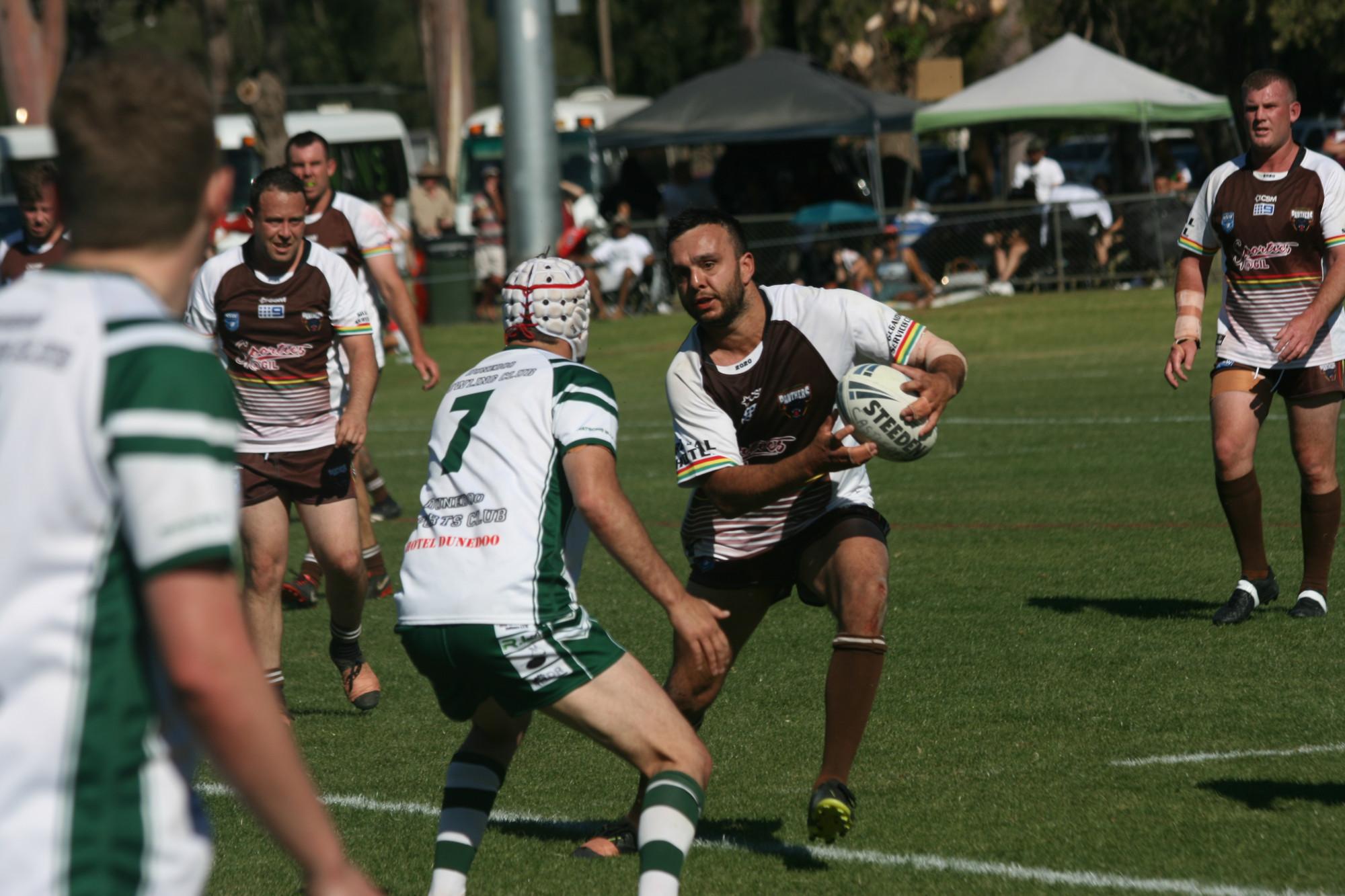 The conversion attempt was waved away and the Swans led 4-0. Three minutes later, Tyler Bamblett finished off a sweeping backline movement to touch down in the south eastern corner to level the scores.

Brandon Hammond’s conversion attempt was also waved away and that’s the way the score would stay until, just as the hooter was sounding for the end of the first half, Dunedoo were awarded a penalty in front of the sticks. Kurt Thompson calmly potted the goal to have Dunedoo two points in front as both sides headed for oranges.

The Swannies must have enjoyed their half-time break as they came out on fire in the opening minutes of the second stanza.

Will Wood put the visitors further in front when he crossed out wide after only five minutes of play. They extended their lead three minutes later when they elected to run the ball on the last tackle and captain/coach Tim Condon had a firm grip on the trophy when he slammed the ball down between the sticks.

Thompson converted and the Swannies led 16-4 with the home side having all the work in front of them. The Panthers seemed to be trying too hard with mistakes creeping into their game and continually turning attack into defence. Their supporters willed them to lift but Dunedoo were equal to anything that the Panthers threw at them.

Finally, a typical Ned Kelly charge at the Swannies defence gave the Panthers faithful something to cheer for when he crashed over to score. 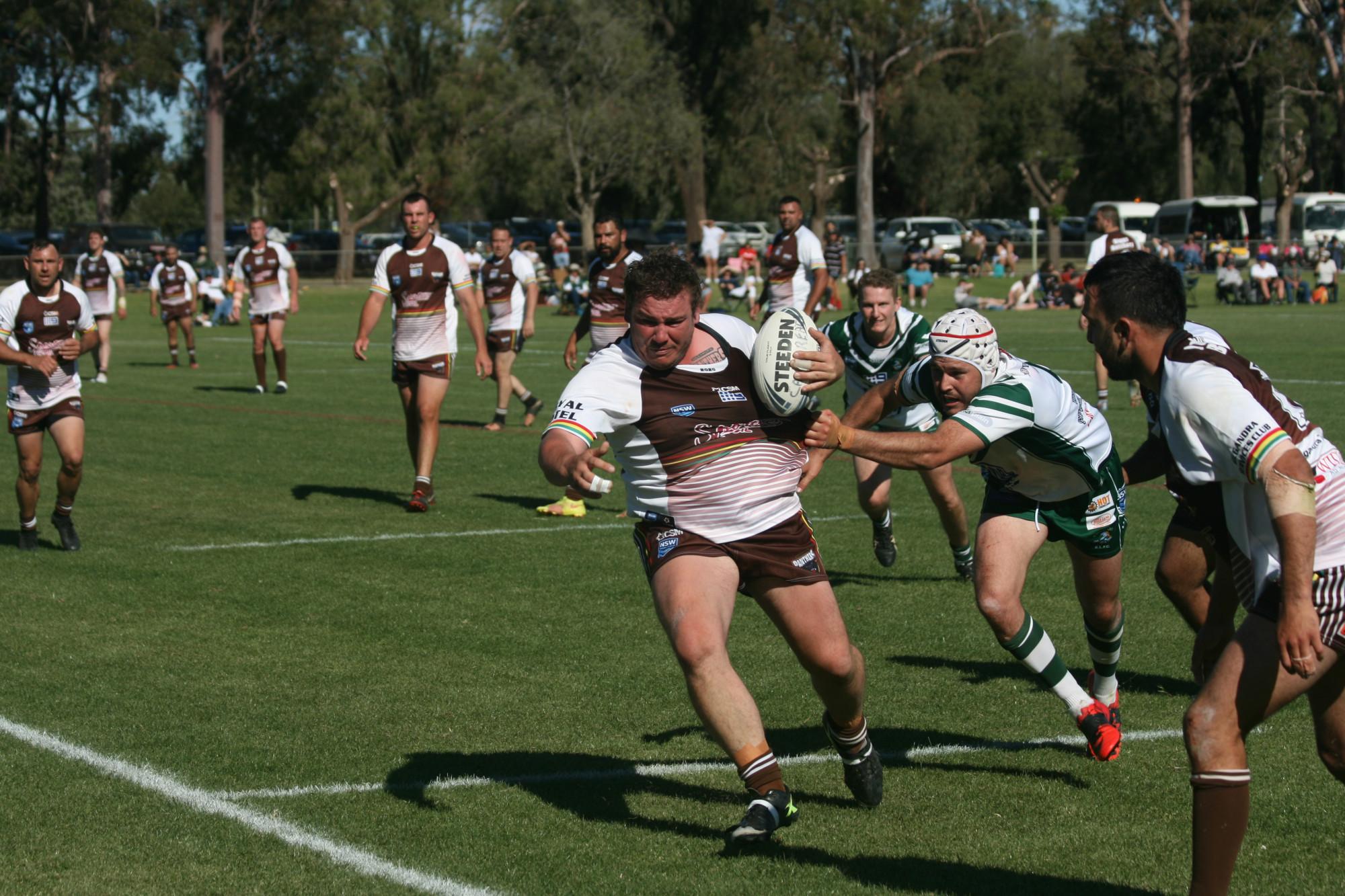 Gilgandra Panther Ned Kelly trying to pull away from his Dunedoo opponents.

Brandon Hammond converted to make it 16-10 to Dunedoo as the clock ticked down.

The Panthers had several chances in the dying stages to lock the scores up, but the mistakes remained and the Swans defence held firm until the final bell rang and the Swannies were crowned the 2020 champions.

Although defeated, the Panthers can hold their heads up high for what they have achieved in this season’s crazy world as they elected to go forward with the competition while others fell around them. They gave their supporters and their community something to look forward to on the winter weekends and gave their all for their club.

The Dunedoo supporters would have partied late into the night on Saturday as they celebrated their double premierships. The Dunedoo Swanettes claimed their first premiership with a win over Baradine in the Mon-arch Blues League Tag grand final. The Cobar Roosters would have also enjoyed their trip home after they claimed back-to-back titles with a win over the Coonamble Bears in the Youth League match.

The Panthers will come together again soon to celebrate and reflect on the 2020 season at their annual presentation afternoon. The club will celebrate award winners in each grade at the presentation event.