Gulargambone Tennis Club have secured themselves some new look courts thanks to the government’s Stronger Country Communities fund. The town will soon boast freshly astroturfed courts, new fencing and a hitting wall. 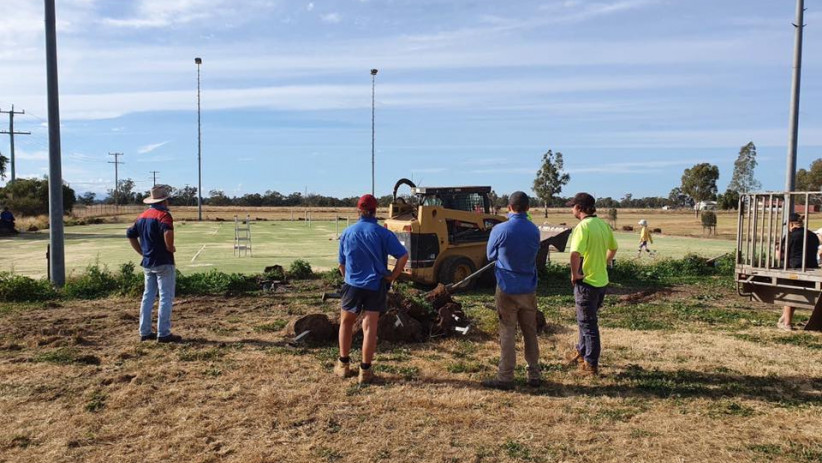 Gulargambone Tennis Club president Doug Kelly said the old courts were starting to get to the point where playing on them was more frustrating than fun.

“They were getting pretty dangerous and it was starting to be unenjoyable to play,” said Mr Kelly.

“If you hit a line or something the ball would roll, and it was all uneven with big holes. It was sort of getting into the state where a couple more years and the courts would have been unplayable.”

Mr Kelly said that the club will be looking to build on their recent solid numbers and the new surface will hopefully bolster that.

“We’re looking to get more people down, the last couple of years we’ve had fairly successful tournaments with a lot of people coming who weren’t coming before. We are starting to build more numbers around the club, so we’re hoping this continues it.”

The club president said the inclusion of the hitting wall might encourage families to bring their children along to tournaments as well, giving them something to occupy them while their parents play.

“We’re thinking the hitting wall might appeal to a few younger children. Parents can bring their kids down on tournament days and let them have a hit on the wall, just get more people involved in tennis,” he said.

New surfaces also means possible new opportunities and Mr Kelly said that conversations had begun between clubs regarding a revival of the Oxley Cup.

“I’ve been talking to a few of the other tennis clubs and there was talk about trying to get the Oxley Cup going again. We were starting to talk about that before COVID, so hopefully we can get that together in some form and get more involved with the other clubs in the area.”

The renovations were fully funded by the Stronger Country Communities grant, providing the club over $100,000 to complete the work.