The 2021 Sports Person of the Year is longtime horse trainer Bruce Parker. 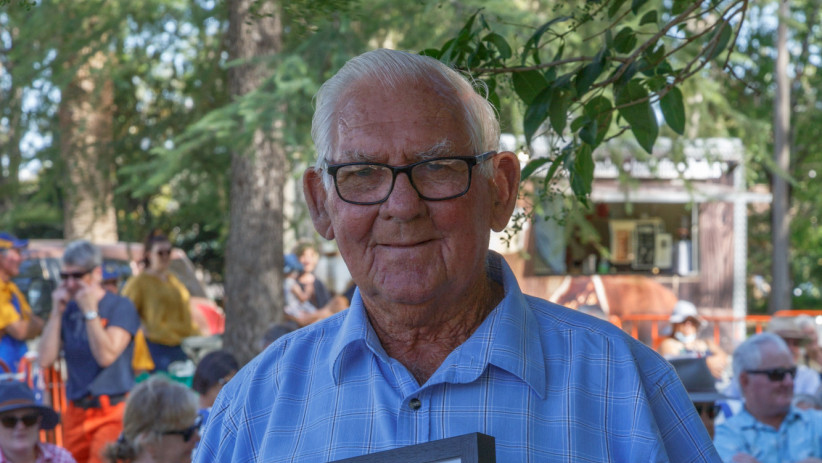 Bruce Parker is the 2021 Sports Person of the Year. Photo courtesy of Narelle Rodway.

The 2021 Sports Achievement Award nominees were read out by Cr Brian Mockler. Nominees for this year’s award were Bruce Parker and Noel Raines. Mr Parker was presented with the award.

Mr Parker officially retired as a horse trainer mid-way through 2020 after 50 years. He has been around horses all his life, starting with trotters and then moving into horse racing. According to Racing.com, his statistics as a trainer are: 1268 starts, 120 firsts, 110 seconds and 103 thirds, mainly in NSW Country but also including 32 starts across Queens-land and Victoria country and NSW and Queensland metropolitan.

His most successful and favourite horse was Raji’s Lover with 14 wins. In Mr Parker’s words: “He won all the cups bar Gilgandra and Coonabarabran. He won Bathurst, Gulargambone and Coonamble”. Horse training is something that needs constant work, feeding and training all the horses in the morning and feeding again at night.

Mr Parker was still employed while being a trainer in the earlier days but after retiring he spent most of his time at the track and was always helping with the grounds of the jockey club and doing whatever was needed. Over his years as a trainer, Mr Parker has also mentored many jockeys. Now that his grandson Kieren Hazelton has taken over the reins and trainer’s licence, you would think Mr Parker is living a life of leisure, but you will still find him over at the track or at the jockey club every day and there’s no way he’s staying at home on race days.

In his spare time, Mr Parker enjoys playing bowls and socialising at the Sporties Club.

Mr Raines was 56-years young when he scored his last century and cricketer of the year award. Other highlights of his cricketing career are:

• Winning 18 ABC shield premierships as a member of the Colts Cricket Club.

• Being awarded the GIO night shield player of the year in Dubbo and taking the honours for best batting and bowling strike rates.

• Playing in four Toohey’s Cup games alongside state and Australian players and taking Greg Mathews’ wicket in one of those games.

• Representing Macquarie Valley and zone in games against Newcastle and Illawarra

• Being named reserve bat for country under 24s.

Dunedoo claims victory over the Panthers in the...