The picker is in town

Robert Noyce has been traveling Australia for decades looking to see what treasures he can find buried deep in the country. Now, he's coming to Gilgandra to turn your trash into his treasure. 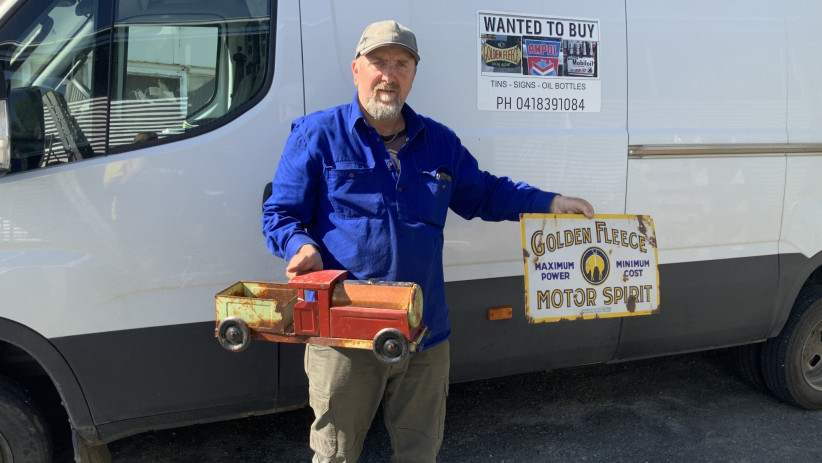 South Australia based antique collector Robert Noyce is coming to Gilgandra and he wants to see what you’ve been hoarding in your shed all these years.

Do you ever go out to the back shed and see all the junk you’ve collected over the years and wonder what you’re going to do with it? Well don’t throw it out just yet, because Robert Noyce might have a use for it.

Hailing from South Australia, Mr Noyce runs his own antique store and is looking to see what the central west and Gilgandra has hidden away.

“I’m just like the pickers on TV but without the camera crew,” said Mr Noyce.

“I travel around buying antiques and collectibles, just any interesting items that I like. Sometimes they’re things that have been made by hand, like an old whip made out of wire that was owned by an old stockman or something. But it’s the story behind the item which I like.”

Having specialised in all things collectable for 30 years, Mr Noyce uses his decades of experience to ensure people get a fair price for their antiques. However, people seem to have wizened up about the value of their junk thanks to all the picking TV programs.

“There aren’t many antique stores around in the country anymore, a lot of the time when older people move, they give away their antiques. I always try to pay a fair price. I don’t try to rip people off at I like to sleep well at night.

“People in my profession sometimes try to rip people off and it gives us a bad name. But since the pickers have been on TV people have started to understand antiques better.”

Mr Noyce said that all through life he had a connection to collecting and trading things, like marbles in his youth. But it was when he found himself without a job, that he discovered how passionate he really was about collecting.

“I ended up being unemployed and I went to an auction and ended up leaving with a car full junk, there was just something in there and I couldn’t stay away," he said.

"It’s worse than any drug on this planet, I just have to get out there and find unusual stuff."

“It’s never any single item it’s more, there are lots of good things, I’ve lost track of my favourite ones. Finding old oil tins and things like that is what gets me excited. Find an old tin that’s 90- years-old and cleans up quite well, is what I love.”

The travelling picker said that it isn’t always rosy being out on the road and digging through sheds full of old gear.

“It can be hard work, it isn’t always an easy ride. You’ve got snakes jumping out at you and you’re dealing with the heat and dust.

“A whole day can just disappear combing through sheds and talking to people about their stuff. Before you know it, you’ve booked in six or seven call ins for the day and it hits 6pm and you still haven’t finished them off.”

Mr Noyce said that one his favourite items to find are old badges, saying they’ve all got stories to tell.

“Badges are great, they tell a story, and Australia was prolific in making pins after the world wars. I think they’re one of the most story telling items you can find in Australia. The country up around Gilgandra is quite good for that sort of stuff because it doesn’t rust as badly as it would on the coast.”