Gilgandra SES have had the slab poured for their new headquarters. But, with a confirmed active La Niña event, they want communities to be prepared for a big storm season. 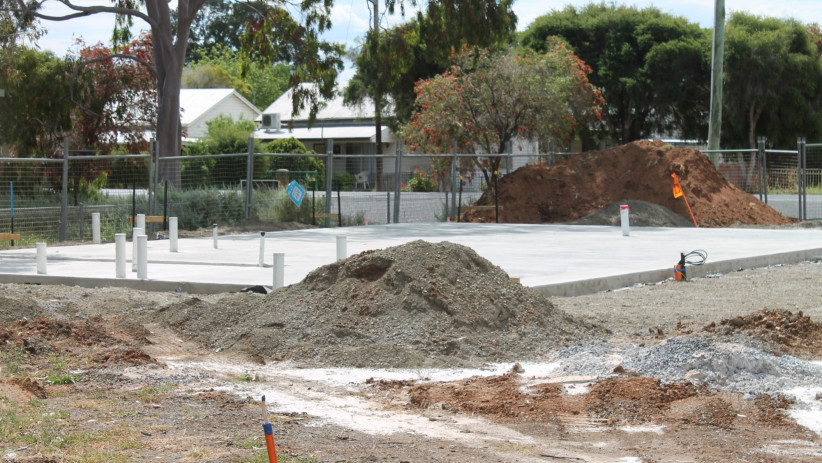 Gilgandra SES are excited to see progress being made on their new headquarters.

“I know it’s a real shot in the arm for the Gilgandra SES volunteers to see their new headquarters starting to emerge with the concrete going down last week,” said Mr Rankine.

“From a zone perspective we are extremely excited to see the work that is happening down in Gilgandra.”

With the storm season underway in Australia and an active La Niña event declared, Mr Rankine said the SES want to prepare people for the possible upcoming floods.

“This year with a La Niña we’ve had some areas in western NSW are seeing one of the wettest years we’ve seen in a while. What that means from our perspective with La Niña is that there’s an 80 per cent chance that we’ll have a wetter than average season through spring, summer and autumn.

“La Niña is exciting, but from an SES perspective that brings its own challenges in terms of preparing for the potential risk of flooding in communities such as Gilgandra that haven’t had a flood in sometime.”

Mr Rankine said that he will be working with communities to ensure that their businesses and residents are prepared for flood events.

This includes educating people on flood height warnings and what they mean geographically and the dangers of flood waters.

“The other thing we hammer home is that in no circumstances is it ever safe to walk, ride, drive or play in flood water."

"We’ve had a huge number of flood rescues where people have tried to cross flooded roads and causeways that have been swept off due to the power of the water.

“We’ve sadly had a few deaths in NSW this storm season and its only just started. From the city out to Broken Hill we’ve had tragic loss of life where people have decided to worth the risk to try and drive through that water.”

Australia is a country well versed in natural disaster, particularly with historically destructive fires ripping through the nation earlier in the year. Mr Rankine says that people need to approach floods as warily as you might approach a fire.

“One of the key things we’re trying to get across to our communities is that we’ve experience horrible bush fires and under no circumstances would anyone risk driving through a fire."

“We’re saying take that some cautious approach with flood water. There are dangers that are very different, but the outcomes can be very similar.”