A new Aboriginal art mural has been created in the physiotherapy section of Gilgandra MPS. 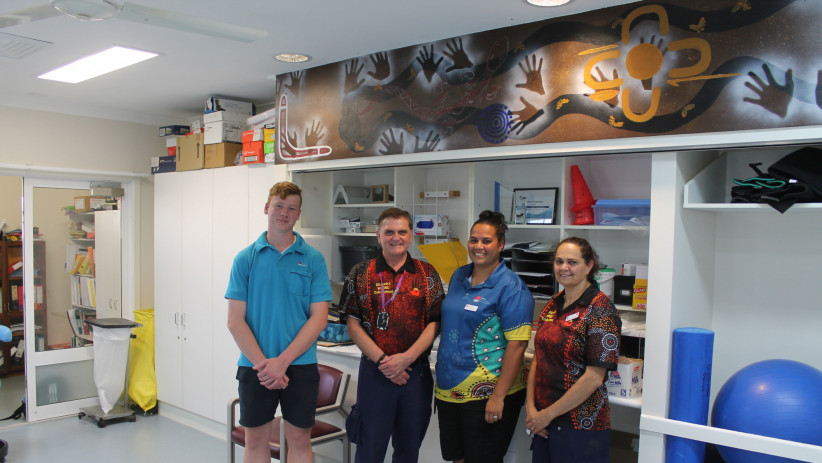 Buddie Knight has created an Aboriginal art mural in the physiotherapy section of the Gilgandra Multi-Purpose Service (MPS).

The artwork depicts the patient centred care that is given to the many physiotherapy patients who have come through over the years and those who continue to receive treatment.

The title of the mural is “Murungidyal Marra – Galang”, a Wiradjuri word that translates to “healing hands”.

“I have always had a keen interest in art; using all different types of medium, whether it be sketching, painting or photography,” said Mrs Knight.

Each symbol has a different significance and meaning towards the community and the artwork itself.

The kangaroo, emu and goanna are the totems which represent the three tribal nations who are acknowledged here in Gilgandra.

The goanna is for the Wiradjuri Nation, the kangaroo is for the Kamilaroi Nation and the emu is for the Wailwan Nation. The hands represent those of the physiotherapy staff in Gilgandra and surrounding communities who work to heal and rehabilitate patients, with the tracks representing the journey that the patients take to get to Gilgandra in order to receive treatment.

The meeting place represents the patients, and the boomerangs stand for the continuity of care received as well as the returning patients.

Mrs Knight says that a number of her family members are talented artists in their own rights and that she has drawn skills from them.

“A lot of my learning has come from my family. My mother, brother and aunties are really talented artists, including my husband, Darren. He too is very artistic and has a lot of talent. Darren has taught me a lot about Aboriginal art, including the meaning and stories behind the artwork,” said Mrs Knight.

Mrs Knight has been working as an Aboriginal health officer since August of this year. She said that even though she has only been in the position for a short amount of time, she is enjoying every moment.

“Working with the community is a passion of mine and being able to be a part of providing a culturally safe, respectful and accessible health service to the Gilgandra community means that I am fulfilling part of my role as Aboriginal health worker.''

“I cannot take full credit for the mural itself. David Cross, physiotherapist, and Julie Nolan the physiotherapist assistant, had thoughts of the mural before I started my role at Gilgandra MPS.

“After a week or so of starting my position, they both approached me about the idea of a mural in the physio room and what it would mean to staff and patients. I then created a sketch and offered to do the mural myself and tie it in with our NAIDOC celebrations.

“Completing the mural was a huge effort in itself, but with the help of my husband and three children we completed it just in time to conclude our NAIDOC week celebrations.”