Gilgandra's 2021 Citizen of the Year

This year's Citizen of the Year was as hotly contested as ever but in the end there could be only one winner. 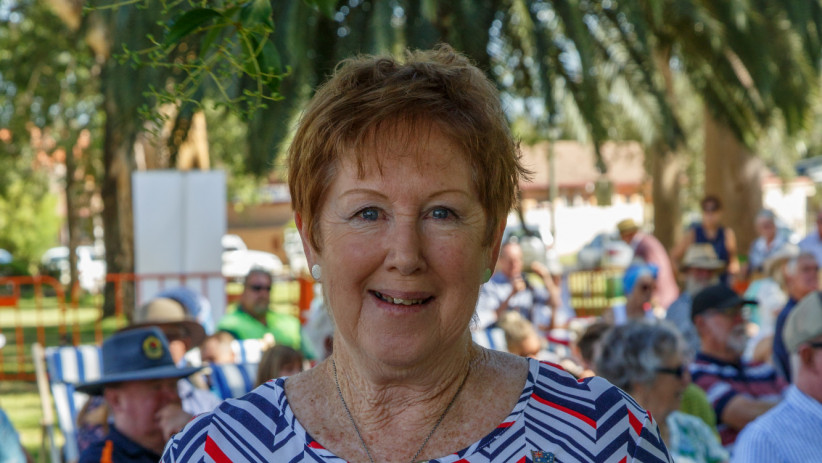 Anne Hall is the 2021 Gilgandra Citizen of the Year. Ms Hall was presented the honour at the Australia Day celebrations in Hunter Park, held yesterday, January 26, 2021.

Ms Hall has been in the role as secretary/treasurer with the Gilgandra Jockey Club for the past 10 years, secretary of the Western Racing Association (WRA) from 2011 to 2017 and became the first Gilgandra Jockey Club CEO in 2019. In 2015, Anne received the Racing NSW Simon Nivison Award which is the highest volunteer recognition awarded annually by Racing NSW. During the past 12 months Ms Hall has co-ordinated the organisation of eight race meetings, there being extra because of COVID-19 where other smaller clubs were unable to conduct their meetings.

Usually, the Gilgandra Jockey Club conducts four meetings per year and this past year preparations were made for eight meetings with one lost due to hot weather. Ms Hall has long been the first point of call for inquiries regarding the jockey club and its race meetings. Her role includes engaging race club staff including barrier attendants, race caller, photo finish operators, stewards, veterinarians, ambulance, video production and volunteer groups for catering, undertaking race day set up and cleaning.

Ms Hall has also developed a compliant COVID-19 Plan for the club and this past year conducted two Calcutta evenings. In March 2020 Ms Hall organised a coach trip from Gilgandra to the Coonamble Jockey Club’s WRA Country Championship Qualifier. Ms Hall also acted as the swabbing steward at the Dubbo Trotting Club for over a dozen race meetings throughout 2020. Ms Hall recently decided that she would step down from her role with the jockey club.

Wearing another hat as the Gilgandra RSL sub-branch secretary, Ms Hall is involved in organising ANZAC Day and Remembrance Day services, local school visits from other sub-branches and assisting with funeral services for ex-service members of the Gilgandra RSL Sub-Branch.

In accepting the award, Ms Hall praised the help of fellow volunteers. “I appreciate all the volunteers and the backstops that have help me in my role. This includes Legacy, Lions, CWA, Girl Guides Dubbo, RSL Sub-Branch members and all the others who have helped along the way,” said Ms Hall. “You don’t do anything unless you enjoy it, and I enjoy what I do. I have always been passionate about racing and horses.

“The people in the industry are terrific as well. I like meeting new people. There are so many volunteers out there, without them where would we be - we wouldn’t get things done that’s for sure.”

Ms Hall was shocked and honoured to receive the award.

“I appreciate everyone’s well wishes. Congratulations to my fellow racer Bruce Parker, other recipients and nominees.”

Nominee Pastor David Jackson is a born and bred local, a quiet achiever and fiercely Gilgandra proud. He has committed his services as a minister and chaplain to the local community for years, but this past 12 months as our local community felt the effects of drought and COVID-19, he often went the extra mile to assist those in need, professionally and as a shoulder to lean on. 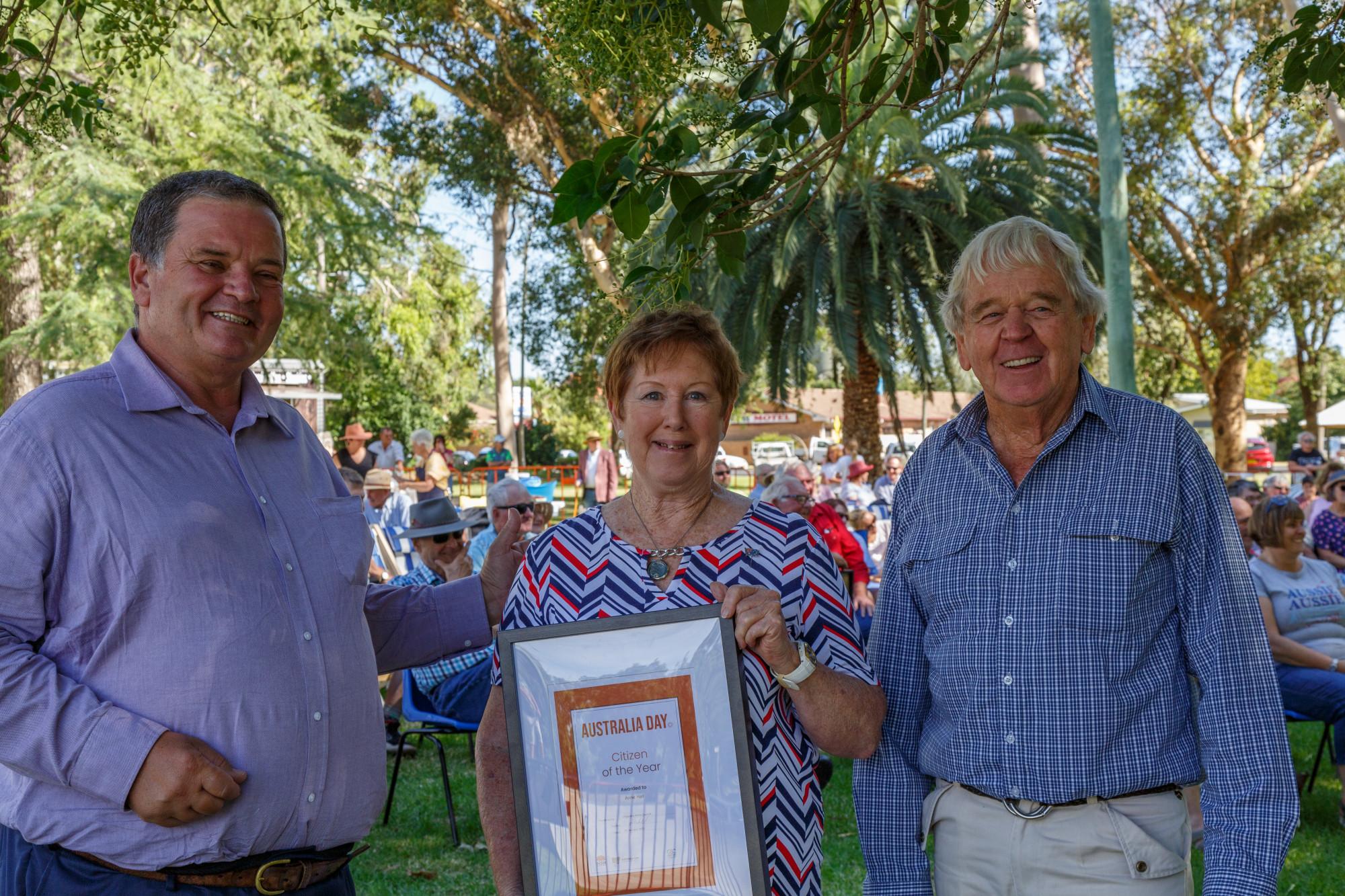 Pastor Jackson co-ordinates Western Air Care, a charity designed to reach people in remote districts and country towns. This year, with the assistance of NSW Rural Assistance Authority, they have raised funds and organised delivery of hay and fodder to over 60 farmers to drop points in and around Gilgandra, Tooraweenah, Armatree, Collie, Neilrex, Inverell, Tibooburra, Walgett, Come By Chance and Coonamble.

He has also distributed one hundred gift vouchers to the value of $100 (provided to the Western Air Care) to be spent in the local community. His co-ordination saw that donations to Western Air Care were poured back into the local economy through local purchasing, thus supporting local businesses.

Apart from the hay and fodder deliveries to other drought-stricken districts, Pastor Jackson headed up and supported the establishment of a community support charity in Wilcannia. He also coordinated donated hay deliveries to fire ravaged Tumbarumba district.

As a minister within the Anglican Church for the past eight years, Citizen of the Year nominee Rector Grahame Yager’s vocation could typically be described as one which supports his “flock”.

This was particularly apparent during the COVID-19 lockdown and subsequent restrictions, when he provided support via phone, email and video link.

As soon as it was possible after lockdown, Rector Yager has conducted weekly church services, weddings, baptisms and funerals, personally undertaking the additional cleaning/sanitising regimes. Mental health has been a huge issue during the drought and COVID-19, and Rector Yager has made himself available 24/7 for any individuals needing support. Rector Yager has been applying for and distributing Drought Assistance funds, food and fodder to farmers and those affected by drought for over four years, within the Gilgandra community and further afield. He worked with the Anglicare, Gilgandra CWA and Gilgandra District Drought Alliance to distribute funds, food and provide assistance to those in need.

He has served on community committees such as Gil Alive, Openway Bookshop, High School SRE committee, and the Drought Assistance Committee and has been a member of the Cooee Choir for over five years and took part in the 2015 Coo-ee Re-enactment March to Sydney. More recently, he became the principal of the Company of the Good Shepherd, which involves regular travel to Coonamble, Nyngan, Bourke, Brewarrina, Warren and Cobar.

He has also been voluntarily nurturing the Anglican parish of Coonabarabran, after their local priest retired.