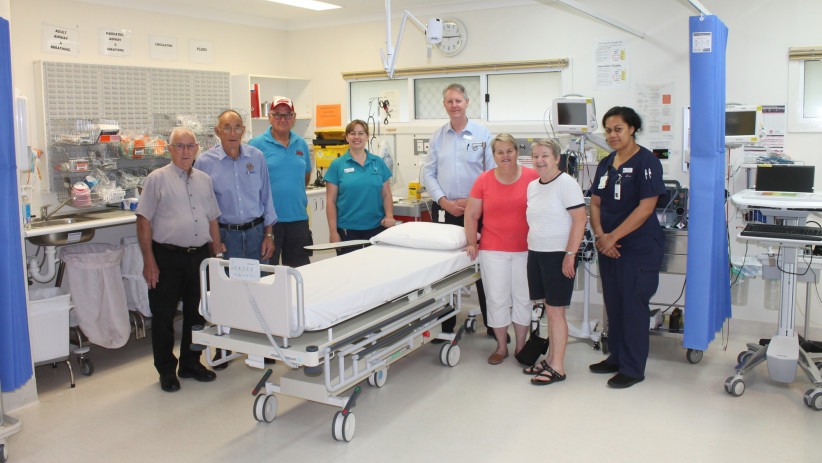 A local multi-organisation fundraising effort has led to Gilgandra Multi-Purpose Service (MPS) getting their very first emergency department trauma trolley. Last year, Dubbo Harness Racing selected the hospital as the recipient of their fundraising efforts at the Gilgandra Community Day held in November. Hospital staff were also at the event raising funds.

With the added assistance of the Gilgandra, Tooraweenah and Gulargambone Lions Clubs and some of the hospital’s own funds, enough money was raised to purchase the nearly $10,000 bed. Gilgandra MPS health services manager Mark Harris said the new bed would be an asset to the staff in emergency situations.

“It’s the same sort of bed you’ll find in the new Mudgee hospital and the Dubbo emergency department, so it’s great to have one here and it is replacing what is effectively just an old hospital bed,” said Mr Harris.

“I think that the staff are really going to appreciate the features that the bed has on it and how much easier it’s going to make it to manage a patient in a serious situation. Having easy access and being able to position patients all helps in the efforts, you want your tools to work for you not against you and this thing will work for us.”

Some of the emergency trolley’s features include being able to be used in x-rays, rather than having to take a patient off the bed, essential items such as IV poles and oxygen carrying capacity, as well as a great deal of adjustability which aids in things such a CPR.

Due to COVID-19 restrictions the new bed didn’t arrive for three months after they had ordered it. Mr Harris said that the Gilgandra Health Council were also a great deal of assistance on securing the bed. “The health council was great with doing the networking bet-ween the different fundraisers.”