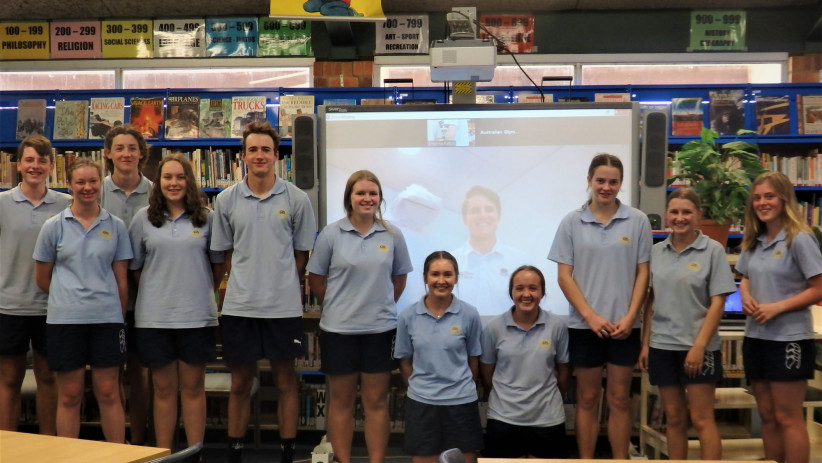 GHS students with Aidan Roach who appeared over Zoom.

Gilgandra High School (GHS) students were given the opportunity to pick the brain of an Olympic athlete last week. Through the Olympics Unleashed Program presented by Optus, Australian water polo player Aidan Roach got to sit down with students over Zoom and tell them his story and what got him to where he is today.

“This is a program that’s trying to get athletes out to schools to talk about everything related to the Olympics and goal setting, resilience and what that’s entailed for them along the way,” said Mr Roach.

“I think it’s good to get the community involved with the Olympic movement and experience, to try and give something back to the students that they can take away for themselves. The program has done a great job of providing a platform for us to still get out there and have a chat with students. Now is probably the best time to talk about it because everyone has been through a pretty tough period over the last few months.”

Mr Roach spoke to the students about his journey to the Australian Olympic team and to Tokyo, which will be his third Olympics. He also spoke about the cancellation of the event due to COVID-19 and the effect that has had on him.

“Obviously hearing that sort of news is pretty tough. I’m a bit older in the team now and few of my other team mates are coming towards the end of their careers and it was probably going to be the last Olympics that they were going to, so to have it pushed out is pretty hard.

“But at the same time one of my good friends was playing in the north of Italy, and in the meantime I was watching the news with hundreds of thousands of people in the hospital there so you can’t get help. At the end of the day I just told myself ‘you’re fine, your family is healthy and compared to the rest of the world you’re doing pretty well’,” he said.

A large part of his presentation to students revolves around goal setting and the ups and downs that come with trying to achieve anything at an elite level.

“If you stay focused on those goals it will help you get through those tough times. It’s not just water polo, it’s anything someone does to get to an elite level, it’s hard work. Nothing is ever going to come easy.”

“The journey isn’t always straightforward, there have been plenty of times I’ve worked really hard and missed out on a team and I’ve had to go back to the drawing board.

“I can’t say that my whole career has been bright and bubbly, but those really tough times make it all the sweeter when you do get to compete at an event like the Olympic Games.”

As the son of rugby league great Steve ‘Blocker’ Roach, the Australian Olympian has benefited from the advice of someone who has seen it all in his sport, which helps form the advice he gives to students.

“My dad has always been helpful whether I had any dramas or any issues, he’s always been more than helpful and given me advice along the way. He’s played in world cups and he’s lost a couple of grand finals, as I have as well, and just going to talk to him about that afterwards and learning how to deal with those sorts of things has been helpful.

“Last Olympics I really thought the team had a red-hot chance and we didn’t even get out of the group, so dealing with things like that is quite tough sometimes."

"My dad had a couple of times like that in his career, so it was really helpful just to touch back with him on how he dealt with it and learning how he got himself back.”

“They were receptive, they asked questions at the end, so it worked out really well. They learnt about Mr Roach’s full journey and the fact that he probably wasn’t going to make it in the Australian competition at first, so he went and played in Europe for four years.

“So that idea of looking at other avenues to get where you want, you don’t necessarily need to have a linear and direct path to get there. He was obviously extremely successful, but he just showed the students the other ways he had to get there.

“It was really worthwhile, and should the opportunity come up again next year we’ll be taking it up. I would encourage other schools and students to get involved in those programs,” she said.