Gilgandra Community Event of the Year 2021

Despite the COVID-19 pandemic, the Gilgandra community still managed to rally behind a number of community events held within the shire. Though they all delivered big, one event had to win and this year St Ambrose Church took out the honour. 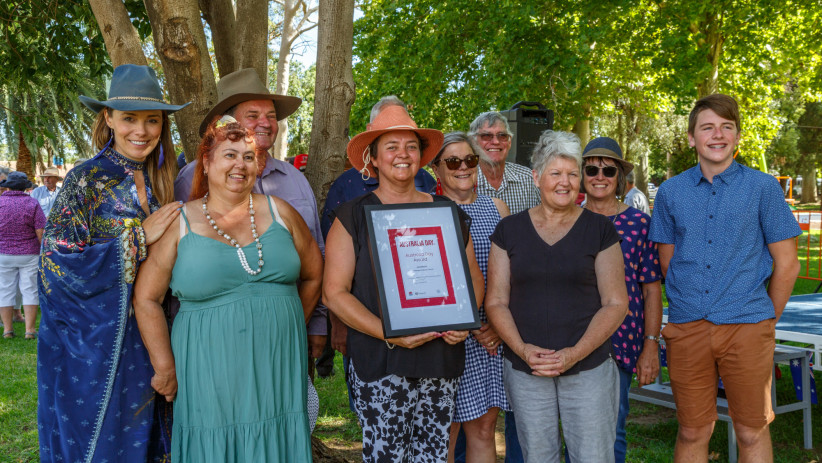 St Ambrose Church were awarded Community Event of the Year for their centenary celebrations. Photo courtest of Narelle Rodway.

The celebrations on November 21, 2020 were to commemorate 100 years since the laying of the foundation stone of St Ambrose Anglican Church. The celebrations were envisaged as a digital online presentation only, due to the COVID circumstances of 2020, with the Gilgandra Shire Hall booked as a venue, just in case. As the anniversary drew nearer and restrictions eased, it became apparent that an event could be held.

As the centenary approached, articles were placed in the local newspaper to develop a narrative. This included the interesting fact that 100-years-ago farmers were too busy to attend the laying of the foundation stone because of a bumper harvest after three years of drought!

Gil Alive, the Coo-ee Choir, musicians, Gilgandra RSL Sub-Branch, Gilgandra Shire Council, a potential MC, other parishes, previous rectors and many more were approached to participate. The response was enthusiastic, and after many hours of rehearsal and planning, magic was produced on the night. The highlight of which was a re-enactment of Isla Tibbits’ comical play, “It Mitre Been Moosejaw”.

A wide array of volunteers from all sections of the community, including groups and individuals, researched, prepared costumes and props, displays and photographs, tickets, refreshments, set up the hall COVID style, and so much more behind the scenes.

In addition to the play, other items included choirs, the enactment of a Coo-ee soldier’s diary extract and several letters, and historical and well-wishers’ digital presentations. The event attracted the maximum COVID capacity of 150 attendees, comprising community members of all age groups. The audience were enthralled from beginning to end. They made the effort to dress in 1920s period costume, supplied their own catering and assisted in packing up at the conclusion of the night.

The event was not for fundraising. It was an effort to connect and unite the Gilgandra community in a safe manner following unusual, prolonged disconnection and isolation during lockdown and the restrictions that followed.

Cooee Lodge’s Pet Therapy nomination is for a series of community events to entertain the residents at Cooee Lodge Hostel and involved visits from a miniature horse, Raven. Raven’s last visit was on December 18, 2020 prior to the turning on of the Christmas lights event on the lawns of Cooee Lodge, involving family and friends of the residents. Karen Thiele, an employee at Cooee Lodge, has taken Raven to visit several times this year in her own time which has delighted the residents, given they have had limited visitors recently due to COVID-19. Karen takes a lot of time preparing Raven for these visits, and the Christmas run included glitter hoof paint, a special little rug and hat.

Diversional therapist, Debbie Kew, usually leads Raven through the premises. Raven is a complete hit with both staff and residents at Cooee. Raven herself even has a few “favourites” she recognises once she enters their rooms or senses their presence. The look of sheer joy and wonderment on the residents’ faces when Raven visits is amazing.

With many community events and fundraisers being cancelled, event nominees Tooraweenah Lions Club decided to hold a Christmas Mardi Gras to end the year with something special for children and families.

Tooraweenah park was the ideal location for this event to be held late afternoon with beautiful shade and the new play equipment. Over 50 children attended the event along with parents, grandparents, extended family and visitors.

With some generous donations from the Tooraweenah community’s “Coasties” friends, an electric train was hired to provide free rides for the children all afternoon/night and children were also provided with free drinks and other items during the night.

The Lions also included a market as part of the event and local stall holders provided a variety of gift items for purchase.

There was also a chocolate wheel with prizes being locally and specialty regional produce. With such great attendance, consideration will be given to having the Mardi Gras as an annual community event.