Juggling harvest and school, local year 11 student Lucy Davis has been recognised for her hard work with a young scientist bronze award. Clocking in at over 7000 words, the depth study required Lucy to work roughly 10 hours a day for a week to finish it in time. 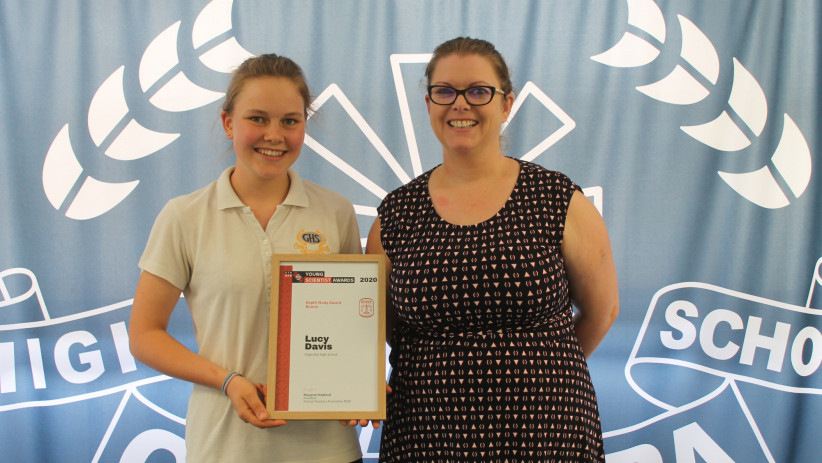 Gilgandra High School (GHS) student Lucy Davis with her science teacher Ilana Austen. Lucy was one of a select few students in NSW to win a young scientist award.

Gilgandra High School (GHS) year 11 student Lucy Davis has won a bronze award in the STANSW Young Scientist awards, in the Rowe Depth Study category. Lucy conducted a 7,424-word review of the various types of intermolecular and intramolecular bonding. She explored the relationships between atoms and molecules in greater depth by constructing a range of models.

Lucy’s year 11 science teacher Ilana Austen said that try as she might, she could not find a single fault in her assignment, spending a few days trying to find even a single blemish.

“Lucy had to go into a lot of depth and detail, the amount of detail she went into was probably equivalent to second year university level, off her own back,” said Ms Austen.

“I spent the equivalent of probably two to three days looking for a fault, trying to find something wrong with what she had done."

“I sort of read it and went ‘this is too good’ and being a new teacher to the school, and not knowing students yet, I had to ask myself if it was copy and pasted. I did speak to Sherryn West who was the head teacher at the time, and she said she was a good kid, and I was like okay well she’s really good then.

Ms Austen spoke on just how prestigious this achievement is, and how it is only awarded to top, upcoming scientists.

“I’m super proud of her, Lucy attained 100 per cent, which is actually the first time I have ever assigned that mark for a student in stage six,” said Ms Austen.

“It is extremely difficult to get an award. The person who won ‘Young Scientist of the Year’ overall actually rediscovered a previously thought extinct species of cicada. To actually attain any level of achievement and recognition is massive.” Lucy’s effort and hard work has been recognised throughout the state, with her winning one of 22 prizes from 860 submissions. Unfortunately, due to COVID-19, the award ceremony looked a little different this year and was presented virtually.

“Normally what would happen is that Lucy would have been invited to a dinner in Sydney and it’s a very big, prestigious award night that students would be asked to attend. The students at the schools that Lucy was winning with were high-performing schools in the state,” said Ms Austen.

“Lucy’s name showed up with two other high-performing schools in the announcement which speaks very highly of her and the effort that she put into her work.”

Being from a rural school and winning such a prominent award against other high schools is something that is such a credit to not only Lucy but her family and GHS. As Lucy lives on a farm and the assessment was due right during the time that her family began harvest, things were not a walk in the park for her.

“I wrote the depth study while we were actually sowing, so I did it in between helping out. I helped with whatever needed to be done, I’d drive the trucks out, make dinners and lunches,” Lucy said.

“I spent almost 10 hours a day for a week on that depth study in between doing all that already. It was very time consuming, it was hard to do and I was very tired afterwards, but I found it very interesting, so I just did it. It was nice to have the award come back because it was a fair bit of effort.”

Ms Austen expressed just how proud she is of Lucy and the effort she put into her work.

“That speaks volumes of who she is and her ability to achieve.”

Lucy says that she is still not sure if science is something she would pursue after school, but she is thinking about teaching and majoring in science.