A bridge not too far 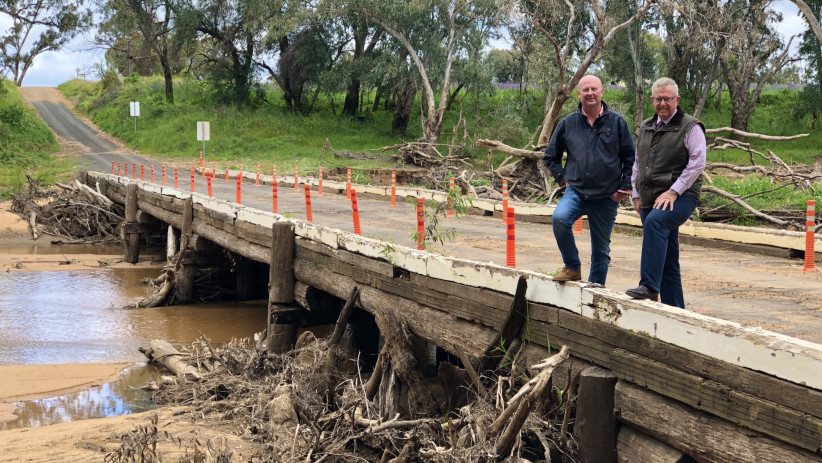 After years of uncertainty and setbacks, the Lucas Bridge has finally been green lit for replacing. Last week federal member for Parkes Mark Coulton announced a $1.25 million grant for the replacement of the troubled bridge under the Bridges Renewal Program.

“The Gilgandra community has long been rallying for an upgrade to the Lucas Bridge, which is why I’m so pleased to support this much-needed project,” said Mr Coulton.

“This grant will allow the antiquated timber structure to be replaced with a new concrete bridge, improving access for the local community and supporting our freight carriers who utilise this route.”

Breelong local Colleen Fraser said the bridge replacement had been a long time coming but that everyone in the area is “really looking forward to it”.

“I’m really pleased it’s getting fixed, we’ve been waiting many years for this one,” said Mrs Fraser. “Everyone was starting to get upset, especially because the load limit was reduced, and we couldn’t put stock across it. We’re really looking forward to it because we’ve had to deal with restricted access for a long time.

"It’s going to make a lot of difference to the farmers out here.”

Mrs Fraser said that she was particularly pleased to hear the bridge height would be raised a further two metres.

“The fact that it’s going up higher will make a massive difference, because we’ve only got to have a couple of inches of rain up in Coonabarabran and we’re looking at that bridge going under.”

Acting mayor for the Gilgandra Shire Council, Ash Walker, said that it was positive for the community to have a works such as this done.

“This project is one that has been a priority for council for some time and one that our community will welcome. The bridge supports agriculture, not only in terms of our local farming and grazing community, but also as a through-road to Dubbo Regional Livestock Markets.”