The successful local merino stud's directors met to discuss the direction of the stud in the coming year and heard a presentation from geneticist Peta Bradley. 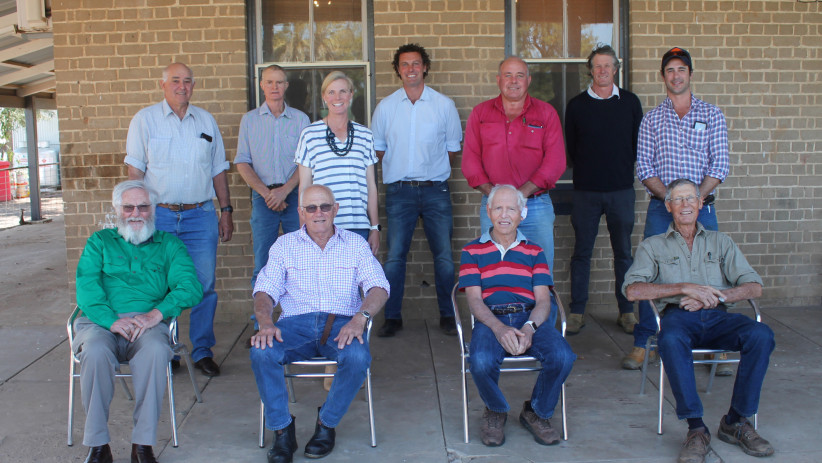 Pictured are the directors of Gulargambone Rural Association for Sheep Selection before their 48th annual general meeting. Backrow is Don Hamblin of Nyngan, Colin Irving from Warren, current stud managers Alison and JB Tancred, chairman Ian Hamblin from Gulargambone, Tim de Mestre of Tarago/ Goulburn and Jack Brennan from Trangie. In the front row are four of the founding directors from 1973: Graham Peart of Armatree, Greg O'Brien and Andrew Perry from Dubbo and John O'Brien from Gulargambone.

Gulargambone Rural Association for Sheep Selection (GRASS) Merino Stud held their 48th annual general meeting last week. The directors of the locally- based stud settled in at the Armatree Hotel for their meeting along with a presentation by Peta Bradley. Ms Bradley is a former local and Gilgandra High School graduate and is the senior development officer at Sheep Genetics, which is a part of Meat and Livestock Australia (MLA), based in Armidale.

“The key points discussed with the GRASS directors were the genetic progress they have been making and the some of the small things they can do to gain the edge,” said Ms Bradley.

“GRASS has been making good genetic gains, but there’s just those little extra things they can do to push the boundaries. We also discussed the direction they’re going wanting to go."

“COVID has had an effect on prices received for some commodities, like wool. We spoke about the current trends and future prediction over the longer term because genetic selection takes time.”

Ways in which the stud might gain the edge included refining and improving different recording techniques, the use of genomic selection for ram lambs and optimising the use of the program MateSel.

“MateSel is a computer program that breeders have access to, not just in sheep but in a whole host of industries including trees, salmon, prawns and cattle. Many agricultural industries use MateSel in their breeding programs.

“MateSel is a really exciting program that basically helps farmers select which ram to join to which ewes. We want to maintain genetic diversity, so avoid mating related animals but also continuing to make as much genetic progress as we can,” she said.

Ms Bradley said that GRASS Merinos uses a selection index that is different to most others in the merino industry because of the inclusion of early breech wrinkle. Selection indexes help breeders balance multiple traits they wish to improve. For example, balancing wool and meat production.

“The really unique thing about the GRASS selection index is that we included a trait called early breech wrinkle."

“GRASS have included early breech wrinkle in their selection index because on the ongoing uncertainty about the sustainability of the mulesing practice.

“Genetic progress takes time so it is important when breeding sheep to be thinking of the future markets and climate we will be operating in.”

One of GRASS Merino’s founding directors, Graham Peart echoed Ms Bradley’s statements saying that they were the first stud in Australia to include early breach wrinkle in their index.

“Now we’re working on getting a low wrinkle, our sheep are already very plain-bodied, but we want them more so,” he said.

Mr Peart said that the meeting felt like a “great sigh of relief”, following what has been a tough and costly year.

“The year has been extremely costly to us because we had to feed all our sheep for 18 months, whereas during the drought other people reduced their flocks by 50 per cent, but we couldn’t do that. We kept them in very good productive order and the reward of that was that we got 112 per cent lambing this year."

“We’ve been able to pay the huge cost of feeding and we’ve come out the other side in top production order and we are at the cusp of a major increase in demand of our rams.”

Mr Peart said that with Ms Bradley’s help, the stud hopes to build on what is already a winning genetic formula given their number eight ranked ram on Merino Superior Sires for 2020.

“It’s really just fine tuning at the edges, because when you’ve got ram number eight, you’re not doing too many things wrong. Some of the things are measuring the sheep younger and getting them to reproduce younger.

It’s a good year to do it because the season has been so fantastic that the young lambs have grown so well, so we’re joining all our ewe lambs a year earlier than what they would get joined. We’re also looking to see how we can use outstanding lamb rams.,” said Mr Peart.

A number of founding GRASS members were able to attend the meeting.